I love learning about new and amazing things. Last week I enjoyed such a day a day of learning. Firstly I got to attend school for a morning, the first time in many many years and secondly, I got to see the Microsoft’s World Wide Skype-A-Thon in progress. This is innovative learning and pure fun all at the same time. Children from all over the world, from over fifty countries travelled 9 881 582 virtual miles, chatted together and played together… asking questions and learning about each other’s cultures, from their own classrooms. 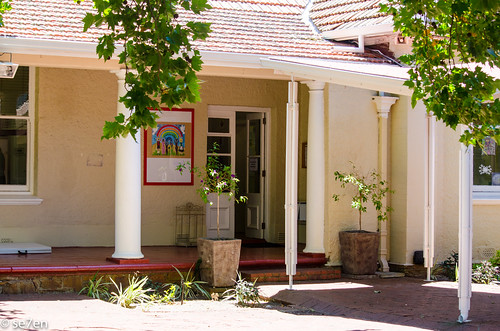 I arrived just in time to see the children engaging in a conversation with Anthony Salcito, the vice-president of WorldWide Education at Microsoft… who performed a marathon, staying awake around the clock more than once, so that he could engage personally with each classroom as they moved from time zone to time zone. 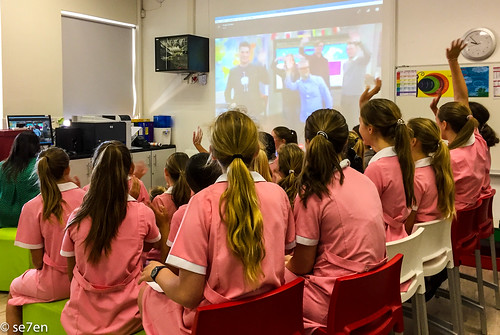 First the children sang a drumming song for him, because music is the universal language… and then they played a guessing game. They showed him photographs and gave him clues and asked if he knew who or what the following South African things were: Rooibos tea, a Koeksister, Springbok, District Six, Trevor Noah and Biltong. He was surprisingly clued up about our country and the children had a fantastic time. Chatting to him as if he were right there in the classroom. They told him all about their Entrepreneurship Class and how they raise funds and contribute to local charities. This past year the children collected pet food, library books and money for a local orphanage. Then they asked Anthony Salcito what Microsoft does to support and uplift local communities. He replied that Microsoft really encourages their workforce to be involved in community projects and they match hour-for-hours spent in community work with cash contributions. 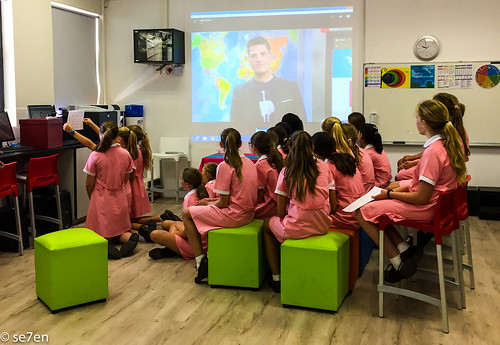 The children had quite a lot to say about their interview afterwards as well. They ranked it 9/10 as a way to learn about other cultures and 10/10 as a fun experience. Not only that, but children discovered that they had learnt a lot about their own culture in preparing their quiz for the event.

There was a lull in activity and I got to chat with some of the teachers about their interesting online learning. One of the teachers is a Microsoft Innovative Educator, with lots of expertise and training and full of ideas about how they use other microsoft tools for innovative teaching. The children are given real live projects, they have to collaborate and use thinking and reasoning on a number of levels and then present something to show learning, using technology. One class built their school to scale with Minecraft, using google maps and real live measurements. Another class was working on the Mars 1 project and were able to join their scientist in the Skype classroom and ask all the questions they needed to ask to proceed with their question. You can meet their scientist, Adriana here… It really is incredible how internet access has opened up the world to curious folk, no matter what their age is.

A new class came onto the scene and a dance session, to warm up their brains. This class got to learn about other cultures around the world, playing a game called: Mystery Skype. The idea is that teachers from around the world connect on Skype… and then the kids all ask each other questions… to and fro to figure out where they are in the world. It’s not as easy as you might think… the kids were asking, “Is it hot?” … and the questions very quickly changed to “Are you in the Northern Hemisphere?” or “Are you in Asia?” They went from eagerly waiting their turn to ask a question… 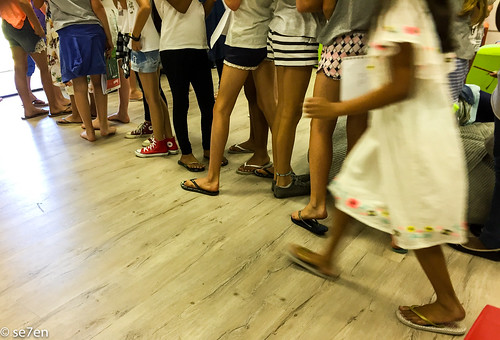 To trying to figure things out… 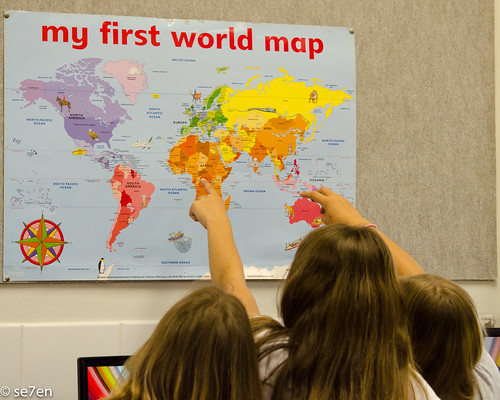 There was a scramble for computer power, as they recognised a flag on the class room wall… 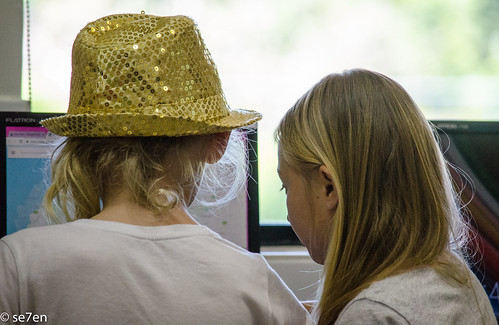 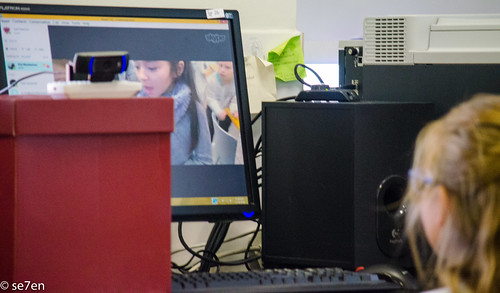 It just so happened that the children in Finland were busy with their English lesson at the time, and with a little help from their teacher, both classes were able to communicate. 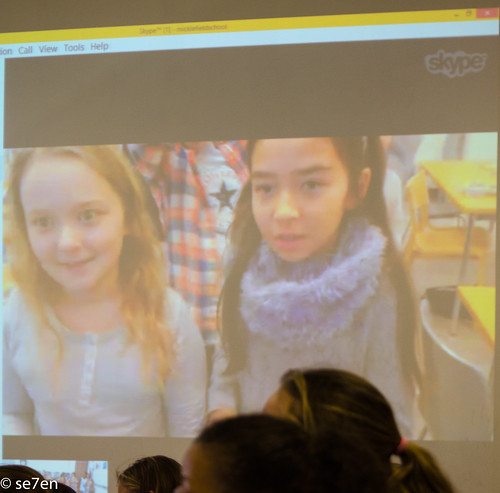 The next class was a lot more obscure to find, not to mention this school overcame a lot of difficulties to connect: their internet connection was poor, the electricity went out and the teacher continued the game with his phone and finally English was not their first language. The kids in this class went from mildly interested to dying to know where our local kids were… their teacher was an inspiration, he was fantastic at encouraging them on. And our local kids were desperate for them to figure it out… 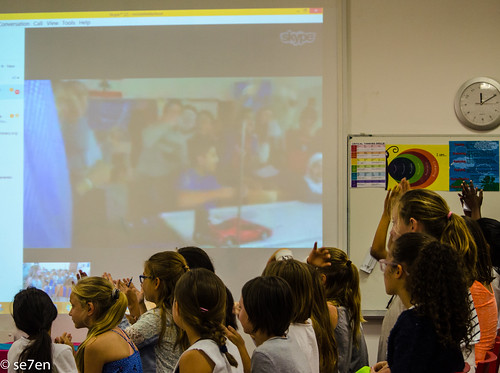 They got as far as Africa, heavy hints were dropped… we are surrounded by sea, but not an island; we won the World Cup, but not for soccer; have you heard of Madiba? We play cricket… and when they finally got South Africa, there was joy on both sides!!! 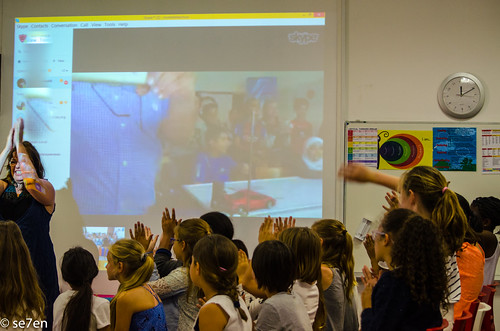 So all in a days work: the children visited Ukraine, Pakistan, Finland and finally Beirut in Lebanon. They learned an enormous amount, they had to use a wide variety of resources, they had to think about good questions to ask… and they loved it. Honestly, I did too… it was great learning in a very fun online environment. My homeschool kids would love to play along with this too and I think we are going to learn more about it for next year. 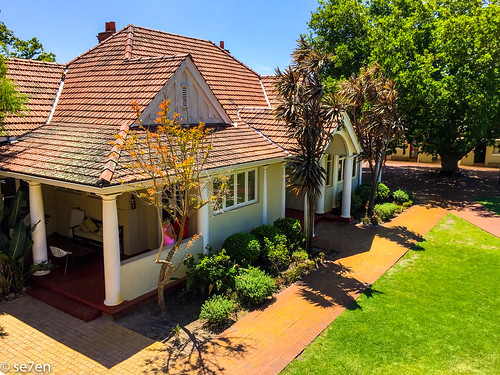 Thank you so much to the very friendly staff and students at Micklefield School in Rondebosch, who hosted the Microsoft Skype-a-thon, and welcomed us in to share their exciting learning experience. Thank you also to Microsoft South Africa for the invitation to their annual Global Skype-a-thon. If you want to know more about the Skype-a-thon, then look for the hashtags #msftedu and #skypathon This was not a sponsored post, I was not paid to write it and opinions expressed were, as usual entirely my own.