A couple of posts back I mentioned that this had been the summer of reading… I wasn’t joking – and one book in particular stands out. When we saw that Michael Morpurgo’s War Horse was going to be a movie we knew that we had to read it quickly, before anybody got to see the movie!!! 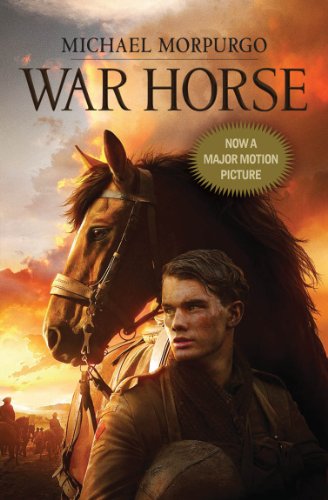 I knew it would be fatal, but when this book arrived at breakfast time I said I would just read a page or two and then we would read a chapter at bedtime… well forget page or two… we read and read and read and eventually a little voice asked “Would there be lunch?” and a resounding din of siblings responded, “Later!!!” We read and read, we did not stop… well there were pauses when the reader (ahem, that would be me) had to take a “I am sobbing so much I can’t read right now” break. And that began right near the start when the young horse, Joey, had to leave his mum for the first time… The story is narrated by the thoroughbred, who finds himself on a working farm in Devon. He grew up alongside his young and beloved master, Albert. World War I began and the army arrived in the village looking for recruits. Albert’s father was desperate for cash to save the farm and sells the horse for the war effort. Albert was devestated, but just too young to recruit. Joey was devestated and so began a separation that lasts the length of the book. It is the gap between them that makes you read on and on, in the hopes that Joey and Albert would eventually be reunited… The horse was shipped to France where he discovered fighting in the Cavalry face to face with the enemy, it was hard, it was messy and you can’t wait to read about some blessed relief. None comes. A trail of events and a battle gone wrong and the thoroughbred found himself on the side of the Germans. Then the horse received first hand experience of the suffering endured by the German soldiers during the war… a young French girl and her Grandpa were able to care for him for a time… but such an asset, as Joey was, had to return to the front and work. The horses either hauled the ambulance or guns and suffered terribly, they were overworked, over exposed to the elements and over exploited. Many of them died and you will hold your breathe hoping that Joey survived. As the reader you are able to travel with the horse and get an image of both sides of the war, the hardships and the terrible conditions that trench warfare brought to both sides. I think something that makes this book different to most war stories is that because the horse is the narrator and the main character, you see the horses perspective on both sides of the war… Just as cold, just as wet, just as muddy, just as deadly, just as frightening. For the horse and for the soldiers on the ground it really was “The War to End All Wars,” whichever side you were on. The horse, Joey had to endure so much and as the reader you will cry for him. You will urge him on just one more step, just one more load… You cannot see the end of the book as you read but somehow the gap between Joey and his rightful owner, Albert, seems ever widening. The reason you keep on reading is you have to know if Joey and Albert if they ever got to re-unite, but the further you read the further apart they get… The more that you hope that the two of them reconnect the more impossible it seems. Now, there are a few authors who write so well that I would like to own every book they have written. Really a shelf in our home dedicated to Michael Morpurgo would definitely be something to aspire to. His books are wonderful, deep and emotional. He tackles painful topics without being “flowery” for his readers and I think that his audience appreciates his transparency. I love his honesty, it is refreshing to find books written for children that don’t cover up or gloss over tricky topics. I was thrilled to receive a copy of this book to review from Penguin Books South Africa, and that in no way influenced my opinion that this is a great book and totally worth the read. In fact I can honestly say if you haven’t yet read any Michael Morpurgo books then head straight for your library and enjoy the read.