This month the folk at Christian Focus for Kids are having a month of blog reviews of their Trailblazer Series, Christian Biographies for Children. We have written about the books in this series previously, because they are fabulous and we have used them so much in our home and they have been a great blessing to our family. We have written before about why it is so important for us to read great christian biographies with our children and this particular series is packed with great men and women that provide our christian heritage. The book we are reviewing today may not be about the most well-known of missionaries but from the very beginning we were gripped… 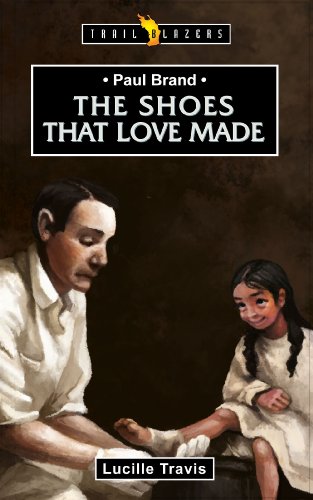 This is the biography of Paul Brand, a missionary to India. He was a trained medical doctor who made incredible and innovative changes to the way that leprosy victims were treated in a time when they were shunned and ignored by their communities, and even those that did recover from their illness were left with bodies that were prone to debilitating injury and all they while these folk continued to be banished.

The book begins with Paul Brand’s childhood in India, where he and his sister spent their early years together. They were born to missionary doctor parents and while they know that they would also grow up to be missionaries they would not be doctors, Paul just did not have the stomach for wounds and blood!!! There were a lot of nods of agreement around our table over that! Turns out that one should never say never, and after years of disastrous report cards in the English school system and a four year spell mastering the building trade… he would indeed end up in medical school and he would complete his training during World War II and experience a lot of training in surgery and anatomy.

He is called to India to work in a hospital there as part of his military “call to duty” and asks that his family join him there as soon as possible. It is there that he begins his pioneering work amongst the leprosy patients. Pioneering work doesn’t begin to cover that the work that this man achieves as he changes the entire world view on leprosy all the while focusing on the hearts and spiritual well-being of his patients.

After reading this book at the table a couple of our kids went off to read it on their own, they read it through in a sitting, they did not pause for breath. It is a gripping tale of a man who began his days barefoot and playing in the great outdoors of India, he became confined to life in a classroom in England, only to be compelled and drawn back to India as a medical missionary. Who would have thought, from the first couple of chapters of this book, what an incredible legacy he would leave behind. How many hearts and lives this one man impacted on as he faithfully followed the path laid out for his life.

When I asked my kids what one word would sum up this book for them this is what they had to say:

Se7en + 1 Things we love about the Trailblazer Series:

We were given this book by Christian Focus for Kids in exchange for an honest review. We were not paid for the review and the opinions expressed were our own. We look forward to bringing you another review from this series in two weeks time.

15 Replies to “Sunday Snippet: The Shoes that Love Made – Paul Brand, A CF4Kids Review…”