If you mention Anthony Horowitz in our house then all ears perk up. When we heard he would be in Cape Town for the Franschhoek Literary Festival we were so excited. And when PanMacmillan South Africa asked us if we would like to interview him… it was a unanimous “YES”… and then we waited months and months and months… until the day arrived!!! Be passionate about what you write… There is something magical about your readers, they absorb your story by telepathy. If you feel happy and excited while you are writing then your readers will feel it too. If you feel an adventure unfolding, then your readers will feel it too. Does he have a favourite book that he has written? Yes, the one he is writing at the time is always his favourite, his best and the one he most believes in. Anthony Horowitz at the Launch of Oblivion

But just take a step back… Last night he had a book signing at Exclusive Books at the V&A Waterfront, for the launch of his book Oblivion. And we were so glad we went because heaps of the questions we planned to ask were asked last night… Here’s our review of Oblivion from a previous post…

When this book, Oblivion, arrived for review my sons actually leapt for joy. The final in an absolutely gripping series: The Power of Five. Five Teen GateKeepers are scattered around the world and their quest is to defeat the Old Ones… ending in a massive battle in Antarctica. Another supernatural/distopian teen read I thought, I take it back. I should have known better than to idly read the first chapter because I’m on page “300 and something” and will not sleep until I’ve conquered the book…

There is no such thing as a typical day… He likes to keep things interesting and has a lot of variety in his days. All sorts of writing… movies, books, articles. Writing can kill you with repetitive strain injuries, huddled over your desk day after day. He does a lot of walking to compensate. Otherwise he is up in his office: “Just me, my dog and a bottle of whisky – for the dog of course.” He does work 10 hours a day 7 days a week. And a book takes him 5-7 months to write – well except his latest Oblivion, which took twice as long. That was 200 thousand words long and was literally like a dump truck of words pouring onto his desk. If an idea is a good one then he will remember it… he does have a notebook for jotting done facts and notes, but really if an idea is worth writing about it will keep resurfacing. He loves real writing with an ink pen, and the sound of the nib scratching away on a page. He likes the idea of using the same instrument as writers of the past, like Dickens, say. When he was about eight. He was in the most awful, draconian boarding school in North London, and in the dormitory at night he would became the teller of tales. You cannot write without reading and reading came to save him from the awful environment he was in. His favourite books were by Willard Price, Ian Fleming and of course he loved Tintin. He really loves to meet people and talk about their jobs, he likes to travel to get a feel for the environment… He couldn’t visit a space station, but he could speak to an astronaut. When he wrote about an oil rig he had to go on one to get a sense for the hardness of it, the smell, the grittiness… He is done with teenage spies, he doesn’t want to be the author that write books that get less and less interesting… thinner and thinner in content as the series drags on. He wants each book to be better and better – so there is no room for endless books of the same genre. Time to move on and he has some good ideas up his sleeve… From the queues of folk who ask him to sign books. A Lot of his characters are folk he knows: Best friends and past school teachers. The teachers never make it in his books, they have a tendency to die dramatic deaths!!! The name Alex Rider – well he did some market research with a really large group of folk responding to his survey. Alex came out tops again and again… and Maurice was bottom of the pile. And Rider… well Rider sounds like an adventurous name, someone who is going places. Well getting the right title is all about getting the right words on the page a good title is: A meeting of strong words written on the cover. Words that don’t reveal everything but make you want to dig deeper… “Frankly,” he says, “There just isn’t enough of it.” He loves to include wild and wacky deaths in his books… no lingering illnesses wrecking havoc on families, no children dying – there is nothing funny about that and nobody enjoys it. But baddies being squashed by a piano falling out of the window… or suddenly crushed under a pile of coins. There are so many intriguing ways to kill a man. He loves to include the element of surprise and it is always a little bit unexpected and amusing. In Stormbreaker the attack by a “Portuguese Man of War” jellyfish was based entirely on a time when one of his sons was attacked by a jellyfish in Barbados. As his son was writhing in pain he leant over him with a notebook asking for details. And that is one thing you will find in all his writing – details… he always explores all the senses: How does it sound, what did it smell like, what did it taste like… details. This is a man that likes to share details.

His older son, Nicholas, performed almost every single adventurous deed that occurred in his books. His stunt man really: paragliding, deep see diving – you name it he did it. The ultimate action man. His younger son, Cass, is his finest critic and made him rewrite about 40000 thousand words in Oblivion – that’s a lot of words!!! Our Interview with Anthony Horowitz

And so we had a bit of a sleepless night trying to think of ingenious questions to ask… And of course there is a fine line between eight over-excited kids leaping all over the show and eight kids just a little overawed by a very fine setting and one of the top writers in their lives’ ever!!! We warmed up with this question, turns out he is a tea and chocolate cookies man. Only he is on a chocolate sabbatical until well forever… about October!!!

Loneliness. He spends hours sitting writing, churning out word for twelve hours day after day – and he loves interacting with people. We could tell!!! We really enjoyed listening to him talking about his work and the adventures he has been on!!!

Good research means he can back up his story with the facts. And then passion, a writer has to have passion, without that readers won’t get caught up in the story. He told us a little from his book: Think about a satellite or space station, they could come crashing down to the earth at any time – they need boosters to keep them up in space. That being said, the chances of anything crashing into a city is remote, considering how most of the world is actually ocean. Have to say he was very convincing and we wondered about the truth in any of his words after that!!!

Well… his first job as a “writer” was as a copywriter for an advertising agency… he was “Rubbish at it.” He felt that every thing had to rhyme: “Gotta say thanks for the best of banks.” But what he loved was his office with a desk and a lamp, a copy machine and an endless supply of paper. At the time he was also having an affair with a gal way higher up the corporate chain – who became and has been his wife for the past twenty five years… So he was fired. But he got the girl!!!

Some ideas get better when you share them… and some are so good that you have to keep them to yourself. This question did raise the very interesting fact that he has a “Cabinet of Curiosity.” Hidden behind a large bookshelf in his study is a room with shelves and all sorts of interesting artefacts like: a human skull, an eel in formaldehyde and a heroine needle used in a real crime.

He is a lucky, as an author, most people know his name but few people know his face. It is a kind of incognito fame. The problem with being a celebrity now rather than even five years ago, is that every single person owns a camera. You cannot do anything without somebody taking a photograph of you.

His favourite book ever is Great Expectations. And right now he is reading a book about a pick pocket in nineteenth century Chicago. He finds that he reads a ton for research and not a whole lot for leisure.

He had to think about this one for about a fraction of a second!!! And then he decided that he would like to swap with his younger son… then he would have himself as a dad and that would be pretty cool and he likes the idea of getting to do a couple of things again – a do-over!!! 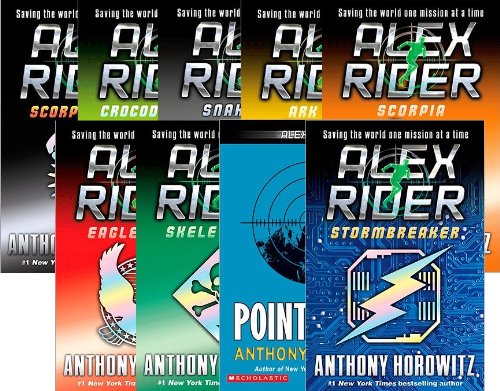 His Next Book: Russian Roulette

Russian Roulette, Launching in October: About Yassen Gregorovich, a terrible assassin – and in which Alex makes an appearance. So many books are about good conquering evil, but what if the call to save the world is from the villains instead? In this book, the link between Alex and Yassen Gregorovich is revealed… and Anthony Horowitz explores the theme: “What make a boy choose to become wicked?” The Next Great Project

Well there are movies, always movies. But he is thinking of a trilogy… each book a cliff hanger, forcing you to read on and on. He has a fabulous idea that he isn’t sharing with anyone. In fact, he would like to hire an actor to represent him and submit it to his agent anonymously. Totally pretend to be someone else… he feels that as he gets older he gets further and further away from his readers… he would like to be someone else… someone younger, someone from another country… just someone different. And the risk… he may get rejected!!! That in itself could be a book!!!

What can I say, what a fabulous author interview… he was brilliant at answering questions and going way beyond the extra-mile in sharing information. I have a feeling we are going to be hearing “Anthony Horowitz said:…” around our house for the longest time. Not to mention, as soon as I post this post I am going to think – I should told you all this or that!!! I did say we would have a week of author interviews… and I really hope you enjoy this one as much as we did!!!

Thank-you so much PanMacmillan South Africa for inviting us to interview Anthony Horowitz. And thank-you Anthony Horowitz for enduring the gang from se7en + 1 so graciously!!!

19 Replies to “Anthony Horowitz Reveals His Cabinet of Curiosities to Se7en+1.”