This week’s book stack is bought to you by Penguin Random House South Africa. The lovely new twist in this book stack is that so many of the reads are written and illustrated by homegrown, local South African authors… I love that they are stories that our children can relate to and engage with… read on, read on!!! 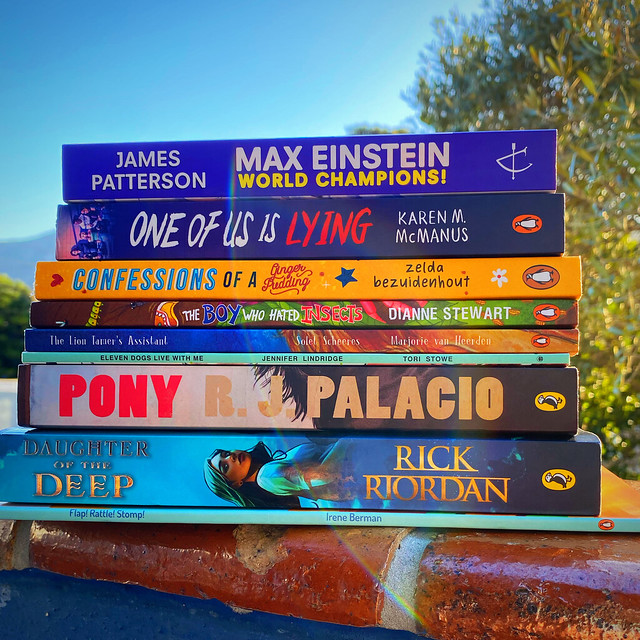 There is something for everyone: picture books, chapter books, tween/teen reads… enjoy!!! 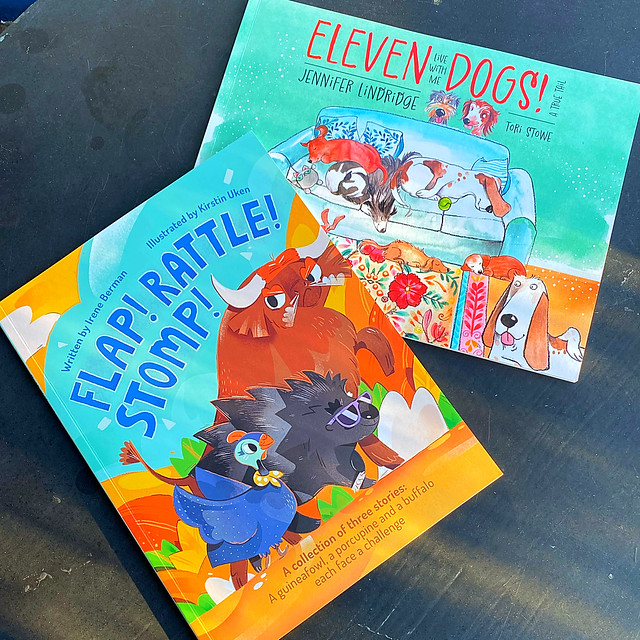 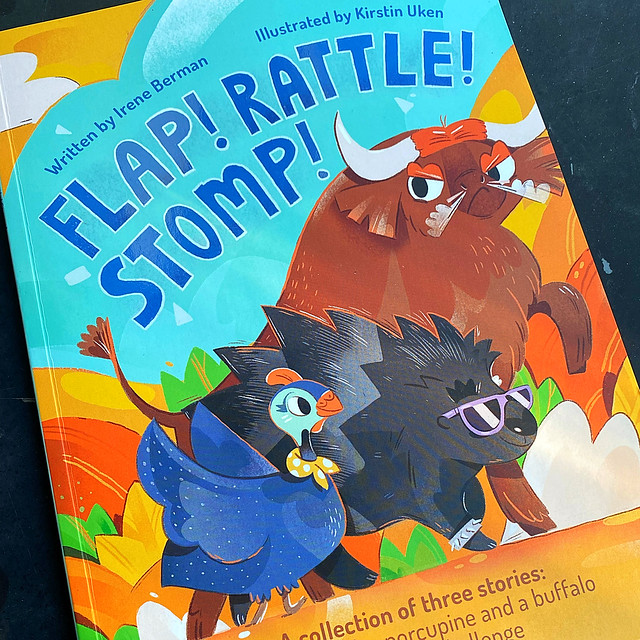 by Irene Berman
illustrated by Kirsten Uken
Three stories about African animals, they each have a problem and their friends help them to resolve them.

Three sweet stories, set in the African wilds, and they each resolved in a happy way… so perfect bedtime stories for little ones.

Eleven Dogs live with Me a True Tail 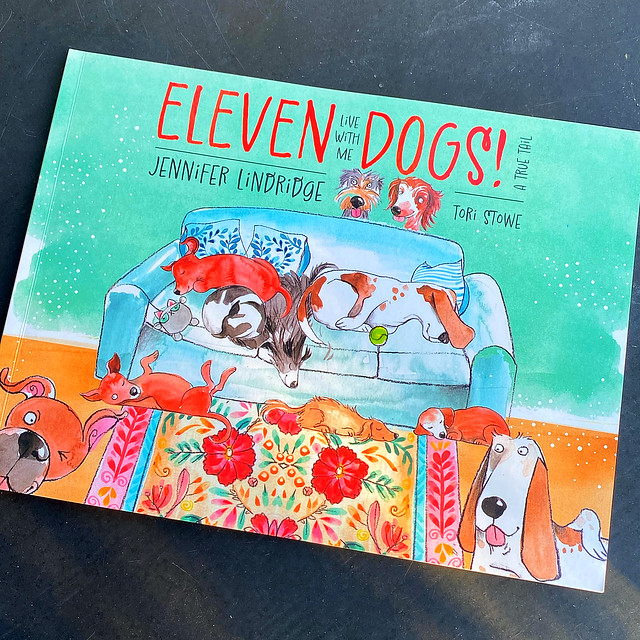 by Jennifer Lindridge
illustrated by Tori Stowe
This is a glorious celebration of all things doggy and young children and their dog loving families, everywhere, will absolutely love this story. It is the true story of a dog lover who has adopted eleven dogs… a day their life so to speak… different pups, different personalities… fun, fun, fun and play, play, play… the illustrations are delightful. The story is one would expect, thoroughly cute. We loved this book, that is absolutely packed with dog illustrations all the way through… it truly is a doggy celebration and needs to be on every dog lover’s reading pile. This book has it’s own website, take a look over here. 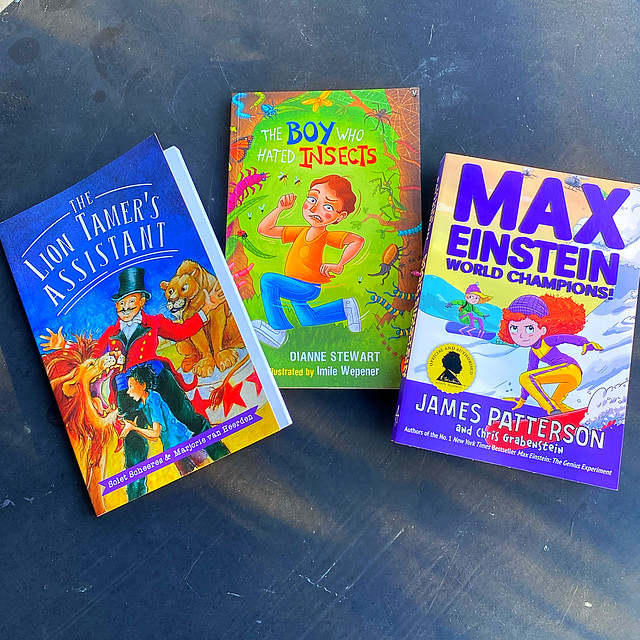 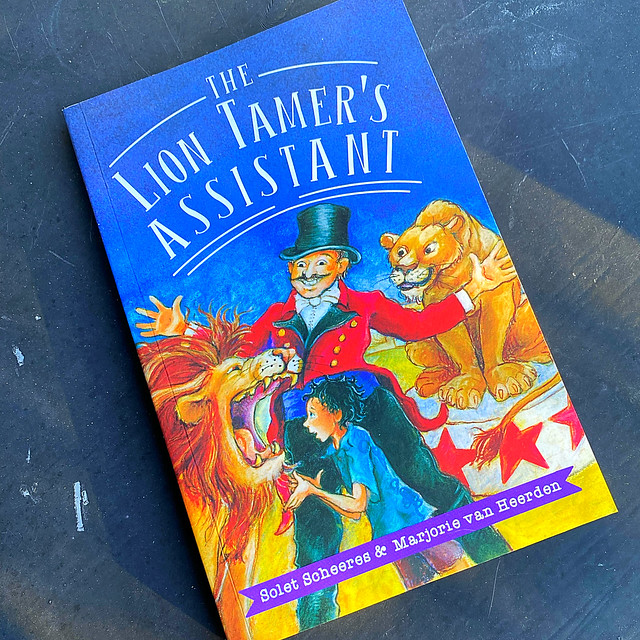 by Solet Scheeres and translated by Lydia Du Plessis
illustrated by Marjorie Van Heerden
This is the childhood book of dreams… in a small Karoo town, Martha takes a dare and finds herself aboard the circus train. Only as the train starts moving out of town, she has unintentionally fallen into a cage… the lion’s cage… she can’t get out and no-one hears her cries for help. She also has very short hair and so when the circus boss sends a message home saying they have a runaway boy on board nobody comes to fetch her. Meanwhile, as she travels from town to town she becomes part of the circus community, so much so that when a group of criminals happens upon the scene and mysterious things start to happen… well for once she is in the right place at the right time. 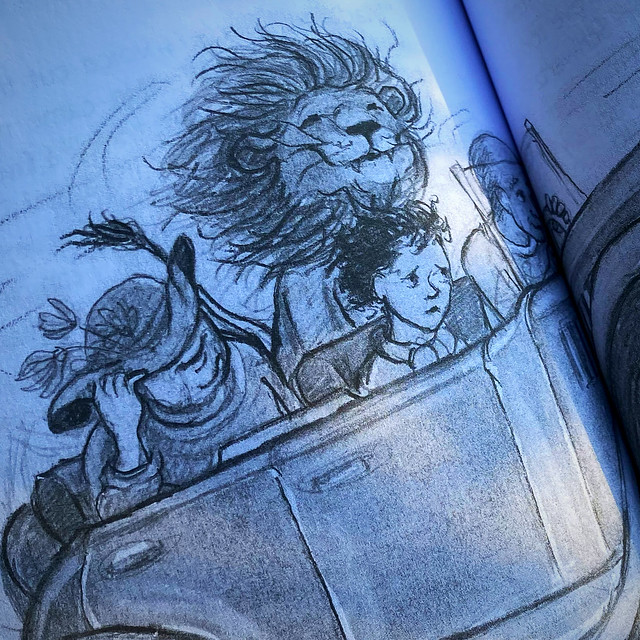 This story is meticulously written for every child that ever wanted to run away to the circus… with a bit of mystery thrown in as well. The illustrations are perfect… This would have been a firm favourite for me as a child… circus loving children of all ages will enjoy it.

The Boy Who Hated Insects 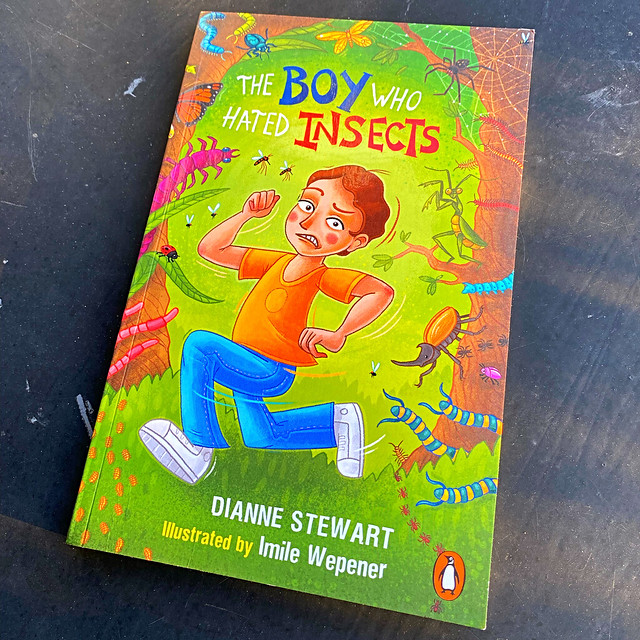 by Dianne Stewart
illustrated by Imile Wepener
This is the story of a little boy called Joshua Bade who hates the idea of insects and really does not want to visit the nature reserve for his school camp because, “Who knows what sort of creatures he will encounter there?” Every chapter in the book introduces a different type of insect from lice (ewwww) to silkworms, mosquitos to crickets. The story winds its way through twenty three chapters on different insects… young entomologists will glean a lot of facts from between the pages of this book. This book is amazing for fact loving children… a first chapter book for a beginner middle grade reader or a book to read a chapter a night at bedtime, for an insect loving youngster. 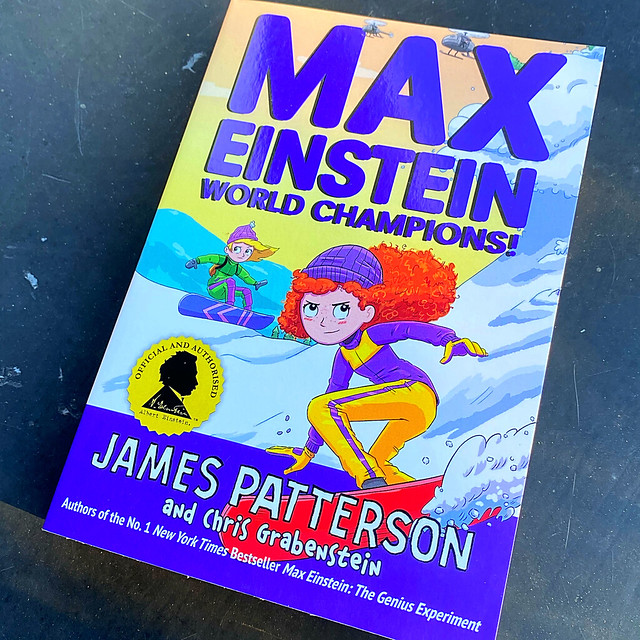 written by James Patterson and Chris Grabenstein
illustrated by Jay Fabares
Max Einstein is a family favourite… a series that we inhale as soon as the next book comes out. This is book four in the series and in this one Max and her friends get to travel the world. Max is twelve and clever and feisty and has been recruited by The Change Maker’s Institute to solve some of the world’s biggest problems. There are several baddies after Max and her friends, at every turn in fact, and interspersed with the mystery of who they are and what they are chasing down, are several interesting facts… from melting ice-sheets to sea level rise, solar powered planes and solar powered highways. The environment is at stake and Max and her team of genius’s are there to save it. 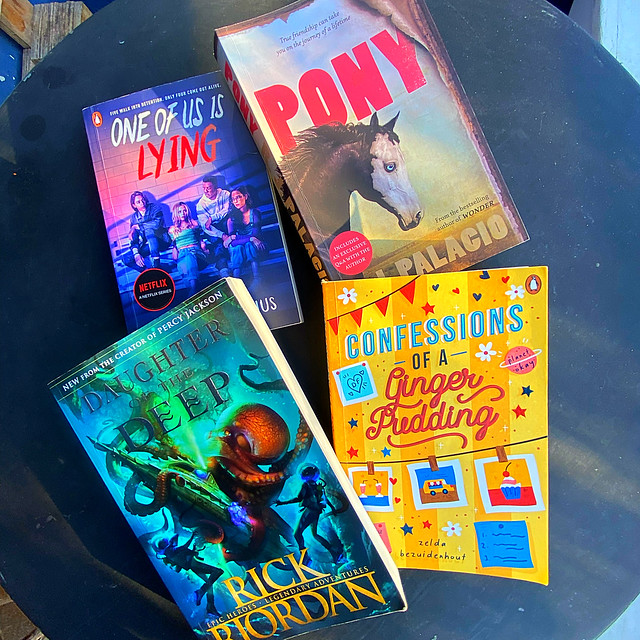 Confessions of a Ginger Pudding 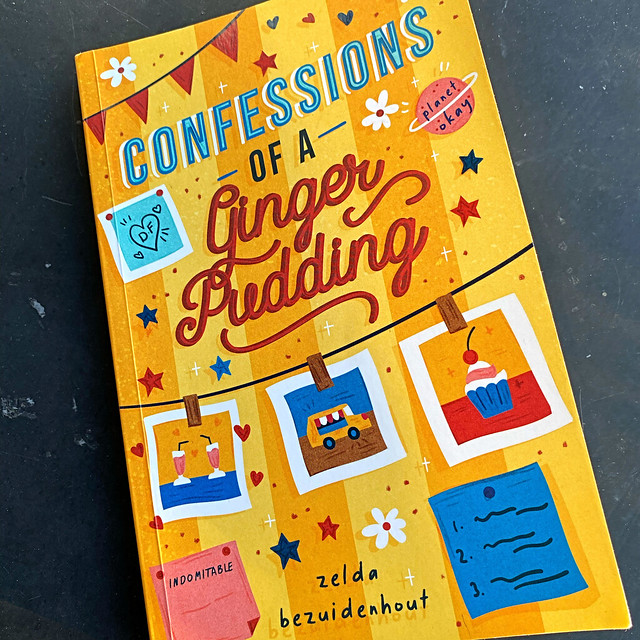 by Zelda Bezuidenhout
This is a story with a lovely South African flavour. Arnelia arrives in a new town with her single mom, and she starts at a new high school. She has decided to leave her past behind and reinvent herself, only on the very first day, she makes a complete fool of herself and her fantastic red hair makes it impossible for her to fade into the background. Meanwhile, she discovered that her true colours are actually rather precious to those people that people that become her best friends. While other teenage girls are pretending to eat a lettuce leaf for lunch, our heroine is nothing like that… she is bright, she is funny and she loves trying new things, and she especially loves experimenting with new foodie ideas. 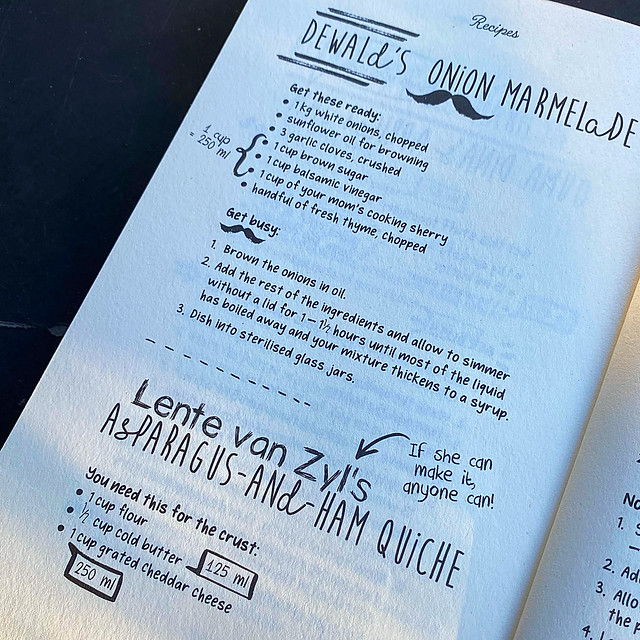 Then she meets Dewald, who makes her heart skip and he loves to cook. The friends have a problem that they need to resolve and they decide to start a food truck, it is a tricky business venture for anyone, let alone high schoolers. Of course, things go really well, and then they don’t. This book is a great read, you won’t be disappointed with the ending… real teenagers in a truly South African context… it is delightful. The big bonus of this book is that it comes with recipes in the back… recipes like frikkadels and Ouma Dina’s Apricot Jam, as well as Dewald’s Onion Marmalade amongst others. 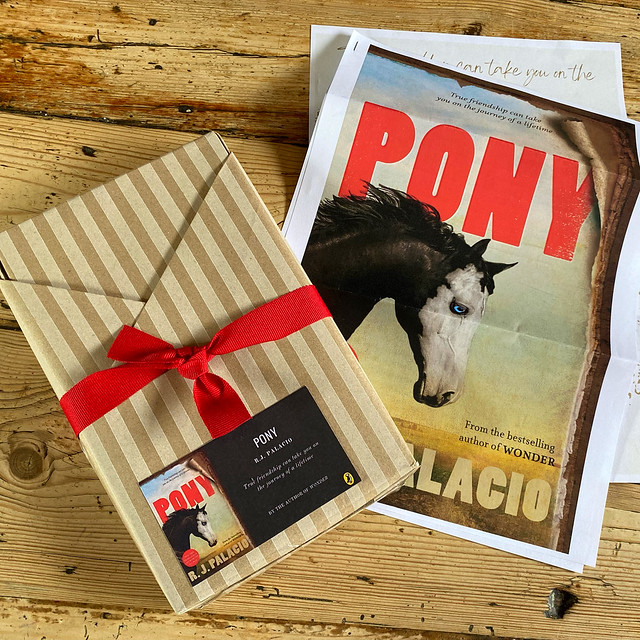 by R.J. Palacio
Don’t read this book because it is by a popular author, read it because it is absolutely brilliant. Also, don’t fall into the trap that because of the title this book is for middle grade horse loving kids… forget that, this is pure nail biting adventure from start to finish and it would make a fantastic family read aloud. Actually, it is slow to start… but it is only at the end that you realise all the pages you read at the end tie into the mystery, that keeps you reading along. 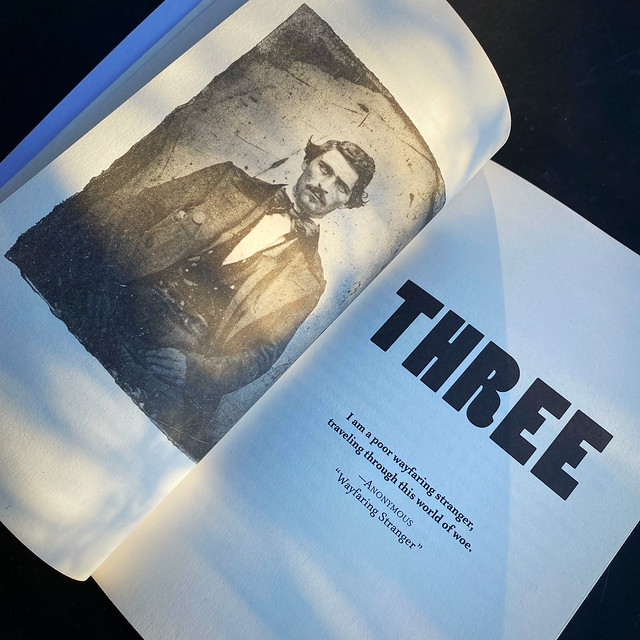 Silas Bird lives contentedly with his father, somewhere out on the dusty American Plains, until one night he watches three men come riding… and they take his father away. He is told not to leave the house for any reason and he is left alone with his companion, an imaginary friend called Mittenwool… (spoiler alert: Mittenwool is a ghost from times past). Of course, it takes a while for Silas to realise that he has nothing and his only chance of survival is to follow his father… the conflict between him and Mittenwool continues as they push and pull each other to and fro… to go after his father or to remain behind. Turns out that there is a large bounty out on his father’s head and while Silas always saw his word loving, photography creating man as his father, there is more to this fatherly figure than meets the eye.

He finds himself on a perilous journey through the wildest west… having to trust extremely untrustworthy characters, and make decisions far bigger than a twelve year old heart is ready to make. I love that the author expects more from the middle grade readers, interspersing quotes and poetry within the book. This is a stunner, and as the story gathers pace towards the final crashing crescendo, we find that not only is Silas’s best friend a ghost but there are possibly other super natural characters in play. Silas is the narrator of the story, but one always feels that there is more to know… The author’s note and personal play in the story brings the whole book together. Honestly this is an incredible read… if your kids won’t read it, then read it to them. We loved this.


Daughter of the Deep 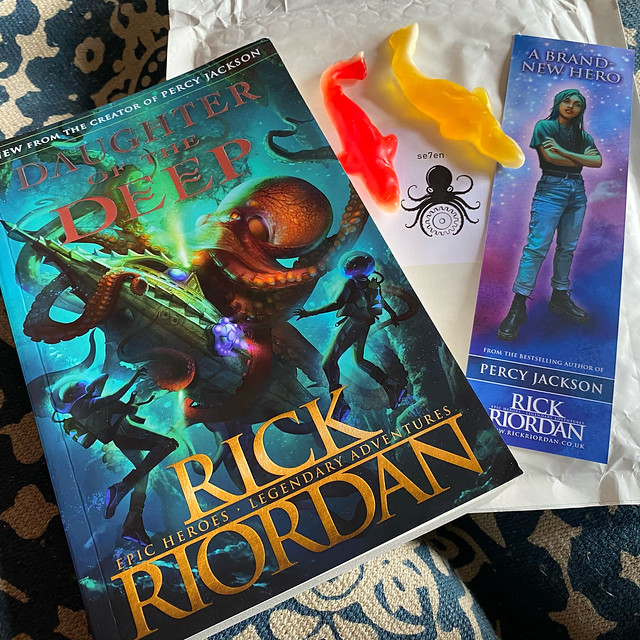 written by Rick Riordan
You cannot go wrong with Rick Riordan and if in fact you have never read one of his books, then this is a great place to start. It was my first one, my kids have been raving on and on for years, and now I think I need to go back and get my mythology facts up to speed. His books are always set in a mythological world… transporting the reader to another place and time. In this one, you are transported to the world of the Twenty Thousand Leagues Under the Sea. 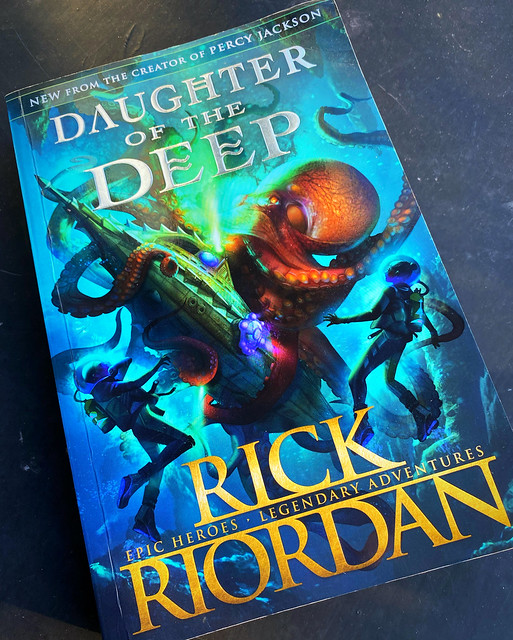 It begins in an elite private school, where everything to do with the ocean is a school subject, alongside another elite school. And they go to war… literally. This book literally transports you to another world… a great big read that I thought would take weeks and I literally finished it overnight. It’s a fabulous book, not only did it arrive on my desk beautifully packaged, but it arrived highly recommended… and my young readers literally inhaled it.

One of Us is Lying 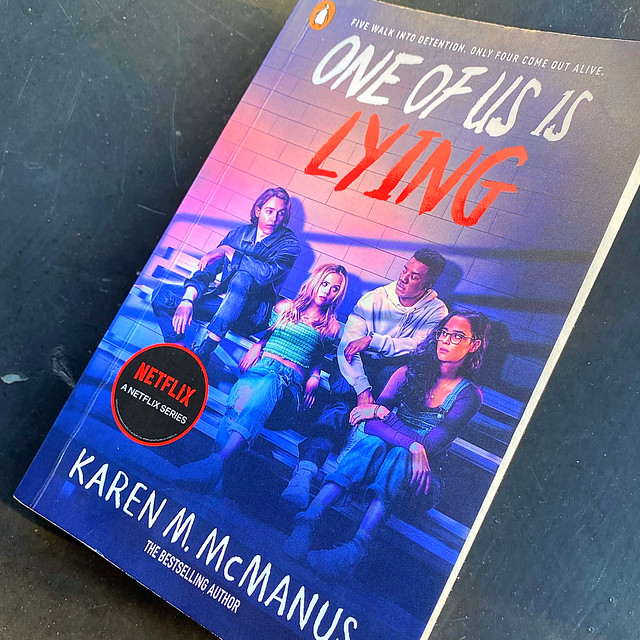 Karen M. McManus
How to get your kids to read a book that is already on Netflix, well, this is a fast and furious read. One of Us is Lying is a great way to climb into the world of the teenage brains you are living with. This is the story of a handful of teens who find themselves in detention one afternoon… and one of them literally drops dead. Anaphylactic shock and a peanut allergy. Of course they are all immediately suspects… they were the last people with the victims and there is a general digging into the backgrounds of each of them. Some of them have an apparently darker past than others and so are more likely to be the perpetrator, but it turns out we all have secrets… and in the online world that our teens live in… no-one may have secrets. Our victim, it turns out is not the most loved character in the school… in fact he has a website publishing secret upon secret upon secret… there is mystery, there is love, there is suspense, there are parents, who never seem to catch up with the narrative, there are twists and turns and a very unexpected surprise. This is an excellent teen read… I read it in a sitting. 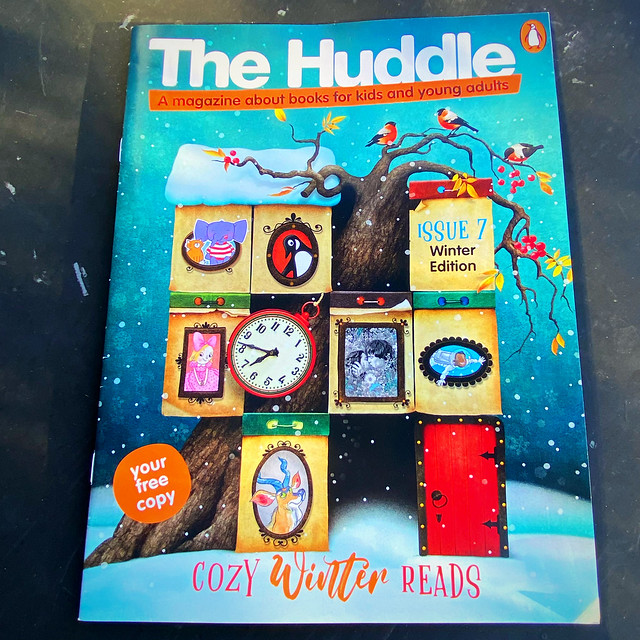 If you are looking for more fantastic reads for kids then grab the latest Huddle magazine, they are free and fabulous, from your local book store.

These books were given to us for review purposes by Penguin Random House South Africa and Lapa Publishers. This is not a sponsored post and opinions expressed are entirely our own.