I have blogged about Ruth before, but really it is one of those books that contains so much more than meets the eye, that I could blog about it again and again!!! At first glance it reads like an epic saga, so much is jammed into those four chapters. I know, it is a short story, only four chapters long. Go on read it!!! Once you start you won’t want to put it down, and that may well be because the book of Ruth is quite simply more than we bargained for!!! 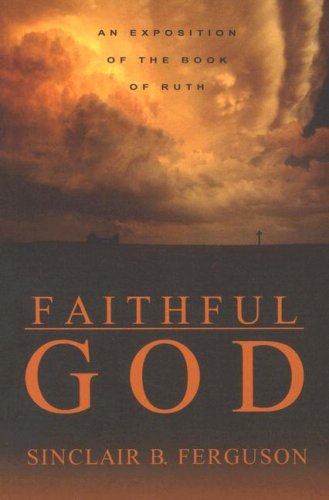 "Faithful God: An Exposition of the Book of Ruth" (Sinclair Ferguson)

Here is a women who lovingly and loyally follows her mother-in-law and lives in poverty off the gleanings of a distant relatives’ field in a completely foreign culture. She obviously is “quite a catch” because she catches the eye of Boaz a wealthy, local landowner, a man of God. Turns out this seemingly innocuous woman doesn’t just have a whole book devoted to her story in the Bible, and she would have thought she was just an ordinary woman, but as time would tell she played a vital role in the life of Jesus… turns out she was the great-grandmother of King David and so she is one of the few women mentioned in the genealogy of Jesus. Now this GiveAway looks like a little book and it has sat on my desk for ages, but it is packed with wisdom and insights and once I began reading it I read it straight through in a sitting!!! It is a great read!!! Originally it was a series of talks by Sinclair B. Ferguson and he has turned it into a little book packed with gems!!! The chapters in this book have a look at each of the main characters of the Book… and you come away feeling as if you know them and not only them but yourself a little better. This is a great book and I wish I had read it when it first landed on my desk!!!

And then because it is very rare for me to GiveAway a Teen Read, I thought I would let you have this one as well… "Watchers" (Sheila Jacobs)
Shiela Jacobs writes fiction for kids and young adults and this is one of her young adult offerings… This book is a bit of an odd one, but my teen thought it was great!!! It is a book set in a utopian society, where unfortunately anyone who cannot fit the “model” is removed. So it is about a man, Mike Merrick whose job it is to contain the sick, the elderly and any non-conformists to the dumping ground of the old city. Mike Merrick is responsible for the security force known as the Watchers. One night they collect a girl who suggests that people are being rescued out of the old city… He has to investigate and it turns out that there is a secret society of Christians who are slowly but surely rescuing the folk discarded by the utopian society. The long and the short of it is that Mike becomes a Christian and starts working, with his specially acquired skills, for the other side and continues the rescue. This book gets a ranking of 3.5 stars (where 5 would be the best book ever).

As usual I have to thank CBD, our GiveAway book suppliers for another great book.

If you would like to win these books, then go ahead and enter our GiveAway. The GiveAway works in the usual way, comment before the end of this coming Sunday, 10 April 2011, and we will draw and publish the winner next week! – I won’t respond to your comments as I do on our other posts because I don’t want to be included in our own giveaway.

Our GiveAway Books are open to everyone: If you have won a GiveAway before never fear – enter away. If you live on the far side of the world – enter away. Postage takes forever from here but eventually it should get to you! Good luck and get commenting!!!

20 Replies to “Sunday Snippet: Another Fabulous Ruth GiveAway and a Teen Read…”