This month the folk at Christian Focus for Kids are having a month of blog reviews of their Trailblazer Series, Christian Biographies for Children. Our Previous post in this series was Paul Brand: The Shoes that Love Made… And today we are telling you about another book in the series: Mary of Orange, At the Mercy of Kings. I know I am always saying how important it is to share Christian Biographies with our children, not least because they inspire us… Generally, the Trailblazer series has provided a heap of fabulous reads for families, with a wide variety of characters. These characters have played an important role in bringing our church from the dusty days of Bible Times, through history, and into the church that we attend on a Sunday morning. 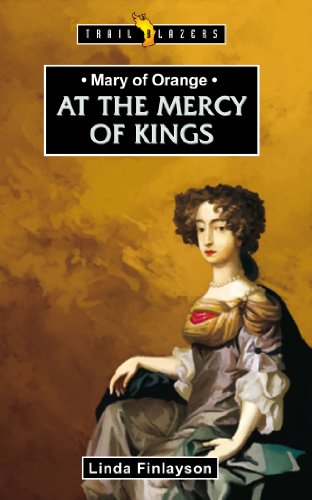 In a world where princesses are depicted as all things glitter and glitzy and a life of fame and fortune, this book is a bit of a reality check. This is the true tale of a princess whose life was anything but glitz. She was born and raised as an heir to the throne in a world that was filled with privilege, surrounded by servants and you would think every possible advantage. And yet, her life was not her own. At a young age she and her little sister were removed from their father’s care and raised by relatives. She was educated and trained in a doctrine unfamiliar to her own. She was caught up in the struggle between the Reformed church and the Roman Catholic Church, with people she loved in both “camps”. At the age of fourteen she was married to her cousin, William, for political reasons. She did not love him at first and did not want to leave her country, England, for the Netherlands either. But as was the norm of the day, you did what had to be done and what was expected of you. Personal feelings were not part of the equation and certainly for young Mary it was a terrifying experience. She was a Bible believing christian and her knowledge of the bible gave her hope and strength during many of the harrowing trials in her life. By the Grace of God, her husband was a bible believing christian too, and they grew to love each other and to serve their people in both of their nations despite their own personal difficulties of illness and childlessness, in an era when an heir was paramount. The author has very carefully wrapped the history of the era around the leading figure, Mary of Orange, who one can’t help empathising with. the intrigue of the next event and then the next and so on, make a really interesting read of what might have been quite a dull and difficult to follow history class. History clearly needs biographies to bring it to life and if you are a reader interested in the era of conflict in English history, the time of the Glorious Revolution, then this is a great biography to read. The author, Linda Finlayson, does a fantastic job of showing us a snapshot of Mary of Orange’s entire life, from early childhood until her death. She carefully builds the character by describing the main events in her life and her reaction to them. When I asked my children why they thought of the book there was a unanimous “good read” and they were able to tell me the historical events in fine detail, they had clearly read it and got the story… But I pushed them further and asked how they would feel if they were certain characters in the book… how would my daughter feel about an impending marriage to a cousin she had never met. How would my son feel about having to marry his foreign cousin when he was busy fighting malicious war for his own country, with battle after battle. I think digging just a little deeper made this book more memorable, and given them an emotional involvement into the lives of these two important players in church history. The end of the book, as with all the books in this series, is packed with useful appendices: A “Who’s Who” of the main players; a family tree provides context; a glossary; maps and as always a very useful timeline; which places the the readers in the era of the book rather than just another date to learn.


We were given this book as an e-book by Christian Focus for Kids in exchange for an honest review. We were not paid for the review and the opinions expressed were our own.

8 Replies to “Sunday Snippet: Mary of Orange, At the Mercy of Kings – A CF4Kids Review…”