At the start of this worldwide lockdown, I found myself unable to read at all and many afternoons were spent staring into space… I had to figure out a time each day just to read and escape for a little, even if only for a few moments in a day. And it is true, a few moments each day really do add up… here are the reviews for some of the books that I have been reading from Panmacmillan, South Africa. 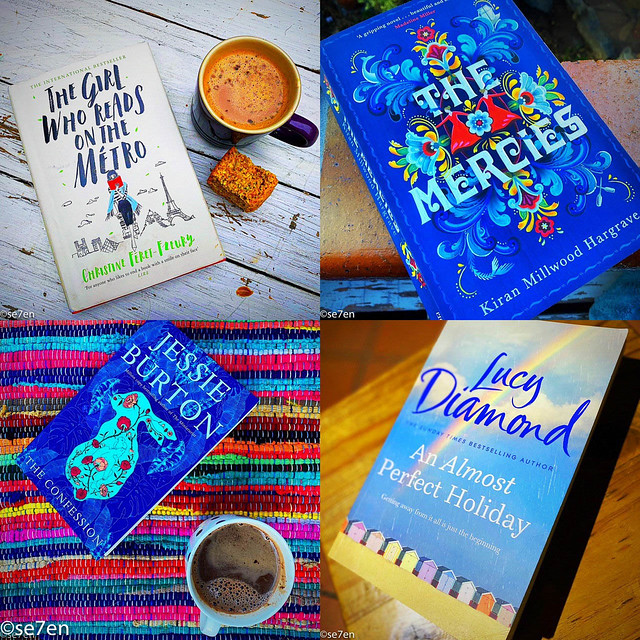 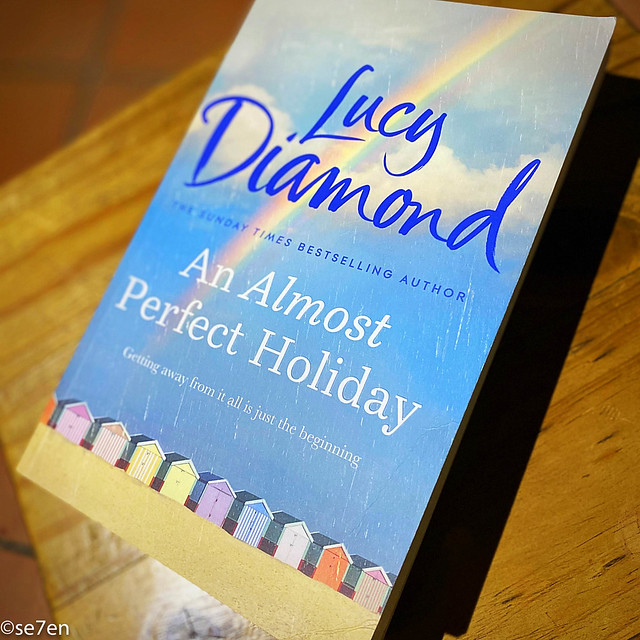 Lucy Diamond’s books are the ultimate easy escape… nice, comfortable reads, the kind of books you would actually like to step into for a getaway. They are books about a collection of people at a moment in time, we get to learn about their lives and their difficulties and how they all interplay… in this book all the main players are on holiday… heading away for a week, or two, in idyllic Cornwall. Cornwall might be idyllic, but their situations aren’t.

Single mum, divorcee, Emma has planned a holiday with her two teenagers. On a whim she invites her boyfriend along as well. The “oh so perfect” boyfriend, George unexpectedly has his seven year old daughter staying with him for the holiday too… and she may be seven, but she is far from sweet and manages to create loads of conflict and fire for all of them. Meanwhile, single mum, Maggie, feels herself drifting away from her teen daughter and plans a holiday away to reconnect, only to discover that her emotionally charged and moody teenage daughter has made plans to reconnect, not with her, but with her father, that she hasn’t had contact with since she was an infant. And finally, Olivia, fraught with single-handedly raising three year old twin boys, storms out of the house one night and finds herself on the road to her past… and you guessed it the small seaside town in Cornwall. And finally, Lorna, the owner of the holiday homes, can’t be left out of the mix, she lost her son when he was a teenager, and she has never quite recovered her broken heart.

The story unfolds, their lives and relationships intertwine. The situations they find themselves in are very relatable, there are some really honest moments. Lucy Diamond deals with issues, relationships and friendships, heartaches and happiness. This is a really lovely read, I think the word that encapsulates heartwarming.

The Girl Who Reads on the Métro by Christine Féret Fleury 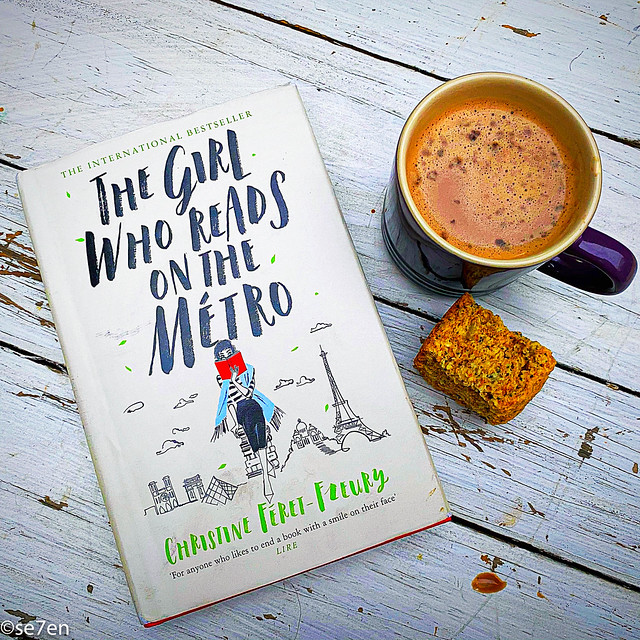 I absolutely loved this book, the feel of it, the cover… everything about it. It is a bit of an arty book, and definitely not your typical sweet romance or murder mystery of a novel,refreshingly so. It is s story set out of time and place really… It is the story of a Juliette, who has a boring dead end job, but she loves to see what other folk are reading on the Metró on their way to and from work each day. Clearly all the folk on the Metró have the same sort of job as she does… because it is the same folk day in and day out. One day, she surprises herself by getting off the Metró at a different spot and in her wandering discovers a gate being held open by a book. It isn’t as random as you might think… inside she discovers a man called Soliman, who while looking after his daughter, also has some sort of a bookshop… a bookshop with a bit of a difference. He doesn’t sell books per se, he has a team of people who one by one match up the perfect book with the perfect recipient. They then leave the books in strategic places, only to be found and so creating the perfect “book-to-person” match. I really enjoyed the idea of the book, I enjoyed the references to famous and not so famous books… there is a little story going on, but not a lot. Soliman it turns out has a secret and he does need help from Juliette, who discovers that she isn’t encumbered by a boring job that life is sweeter and and all round better for her. This is a bit of a zany book, with our delightful heroine, Juliette. It is a lovely afternoon read and the kind of book someone is going to turn into a movie. Read the book, it is definitely better than the potential movie.

The Mercies by Kiran Millwood Hargrave 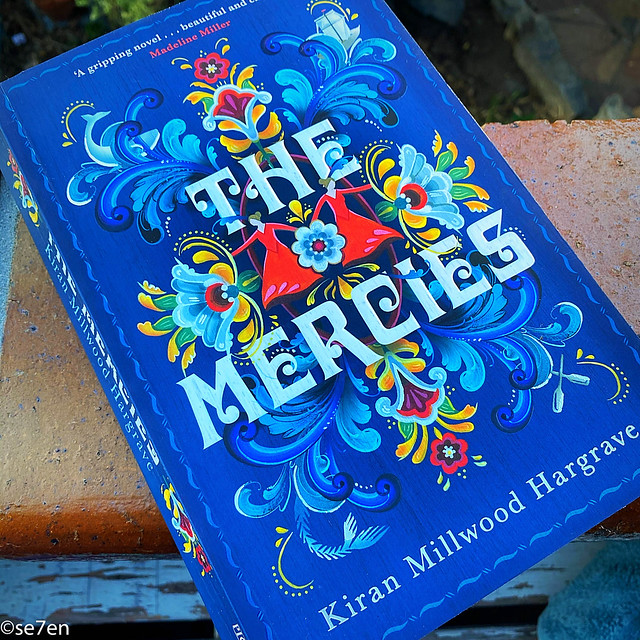 The Mercies was possibly not the best choice of read during lockdown. What a tragic story, a great story, but my goodness, the 1600’s on a remote island off the coast of Norway, makes our lives look like a walk in the park. The book begins with the women of Vardo watching their men folk go off fishing, and suddenly a freakish storm comes up and all the men of the island are drowned. If that isn’t horrific enough, it is Christmas Eve and the middle of winter and these village women must survive with their limited skills and even more limited tools and belongings. For them to survive they have to learn the survival skills of their husbands, fathers, brothers… with no teachers around, on an island, which is as close as you can get to a freezing wasteland.

Meanwhile, months, if not a few years later, in the city of Bergen, young Ursa is hoping for a loving husband. She is the oldest daughter of a shipowner, whose life is teetering on deep depression after his wife died several years before, they are poor on the brink of poverty and Ursa is the carer of her younger sister, who is somewhat crippled. Absalom enters the scene… he is a young pastor being sent to Vardo to bring the so called wild women to heel. Meanwhile, Ursa, who is rescuing her family from poverty travels with him, as his bride. She arrives, having never done a days’ housework in her life… with a man at her side who is definitely not the man she thought he was or the man she hoped for. She has never experienced any kindness in her life, but is empowered and befriended by Maren, one of the local women.

While Ursa tries to befriend the village women, her husband is on a witch hunt amongst them, quite literally. Women should not be pursuing such evil pursuits as fishing, or mending nets… unless of course they are bewitched. It is quite horrific really, that this was their world. As Absalom becomes more and more obsessed with his pursuit of power and evil, so Ursa’s relationship with Maren deepens. From the opening chapter, you have to know that this book cannot have a good ending… it is horrific, it is tragic and if you want to “go somewhere harrowing” in a book and want to feel like even on your worst day your life is a breeze… then this would be a good book for you.

The Confession by Jessie Burton 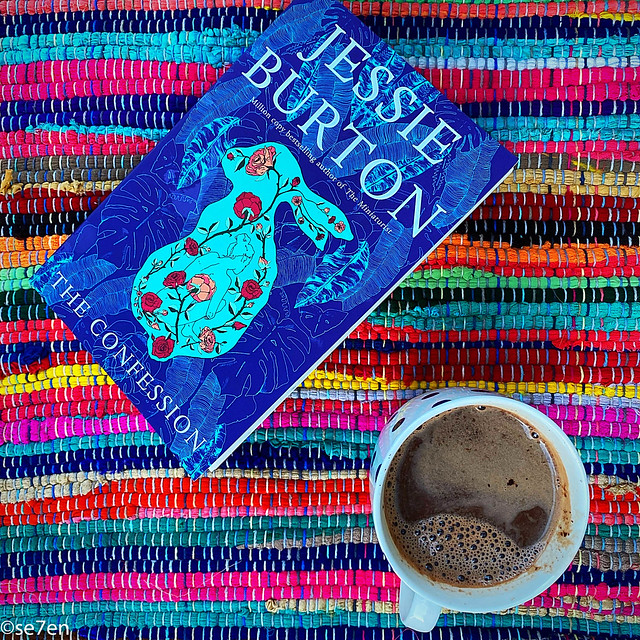 I really love Jessie Burton’s writing and I have reviewed The Minitaurist and The Muse before. I was thrilled to receive her new book The Confession for review. While I speed my way through most books, there is no rushing Jessie Burton. Her books are slow burning… a lot happens the story builds, you wish you could rush through them… but you also don’t want to miss a thing… so you have to slow it down. One thing I can say about her writing is that every book is completely different, feels like a completely new genre, and yet there is a common theme… and that is difficult and wrenching relationships, and can she write these well.

This is the story of a well known author, Constance Holden, written in two eras of her life. In 1980, Elise Morceau intersects with Constance Holden on Hampstead Heath, a coincidence that changes lives for decades to come. Together they have a complicated relationship, Elise because she is young and needy, and Constance, because she is simply overpowering. In 1917, Rose Simmonds, renames herself as Laura Brown, and goes to work for a much frailer and older Constance, as her assistant. But why? Rose is looking for her mother, she has been searching for more than thirty years, every relationship in her life is tainted by her “lack of mother.” The story of Elise and Rose switch to and fro, while Rose’s life is tainted, Elise’s life is clouded by her lack of a mother who died a horrible death when she was nine.

What can I say, lives can get tremendously messy and in a world where, what’s true for me is my truth and don’t worry too much about anybody else. This book covers a lot of ground in the nitty gritty of relationships, not to mention loads of adult topics, almost every character in the book makes at least one very thoughtless decision, without thinking of the consequences, or the ramifications on the people that they love at all. They all pay a price… and the overriding theme is that even in her apparent frailty, Constance Holden has an overwhelming power and influence over people that come under her wing (so to speak). None of the characters in this book were tremendously likeable, but my goodness were they real… a compelling read, that will give you lots to think about on the way… but you are not going to be in a happy place when you are done… you may need to take a breather before you start your next read.

We would really like to thank PanMacmillan South Africa for the copies of these books that we received for review purposes. This post is not sponsored in any way and the opinions expressed are as usual our own.