Now you may well ask “Who is Justin Bonello?” I know, there are still a few people that don’t know. Let me explain he is a local food connoisseur of the traveling kind and writes the most fabulous cookbooks. I would say he was a celebrity chef right up there with the best of them… and he is, but not in the demanding: “Buy my products, Live my life, Cook my recipes” kind of way… he is more about: “I love traveling and cooking and you are welcome to join me.” His books are really trend setting travel books, the kind of books that describe life in South Africa better than a travel book and food in South Africa better than a cook book. His books come packed with South African atmosphere and even the paper has a special feel that sets them apart from your typical glossy celebrity chef type cook book. His first book: Cooked in Africa… describes his life and Travels and Southern Africa and really the trips he took and the food he ate on them… If you have ever eaten anything local in South Africa then paging through this book will bring out the flavor of meals from your past, you will find your self smelling food cooked in the outdoors that you had even forgotten you had eaten!!!

His Second Book: Cooked Out of the Frying Pan when Justin Bonello decided to come in out of the Veld and tour a dozen top South African Restaurants… This book was packed with recipes as he mastered cooking skills from the best chefs in the country. The book left us hunkering after a trip to South Africa’s finest restaurants… And a trip to Gold went straight to the top of our must visit places everyone in our family wants to try out those interesting flavors. 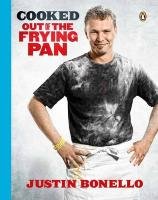 And just recently his Third Book: Justin Bonello Cooks With Friends… And I was lucky enough to attend the launch of his book… And receive a copy for review… He answered a couple of questions from the swirling crowds… Anyway the next day we were lucky enough to spend some time with Justin Bonello at his film studios at the Waterfront and did we have a good time!!! I like it when someone doesn’t bat an eye when you arrive for an interview with eight kids!!! Especially eight kids with heaps of questions!!! They would have liked to have looked about more but I think the great table intimidated them somewhat… luckily for me. Eight kids more or less seated around a conference table is a lot easier to handle than eight kids exploring a film studio.

From the kids journals:

Hood #1: We went to visit Justin Bonello from Cooked in Africa. We asked him all sorts of questions… How to get from a movie to a book. He spoke about eco-friendly and farmer friendly produce, saying we really need to know what’s in our food.

Hood #2: Last Friday we visited Justin Bonello in his studio. We sat in swish chairs and chatted. We finally learnt how to make his pizza oven from a dust bin. And we got a good recipe for bread from his childhood.

Hood #3: We went to the Waterfront on Friday and asked Justin Bonello exactly how to make a pizza oven.

Hood #4: I liked Justin Bonello’s Jeep. It looks great for traveling through Africa. I told him we like cooking spaghetti and meatballs, and burgers from scratch and he said we should try grilling them instead of frying. He was right they were good and it was so much quicker!!!

Hood #5: Our celebrity chef is a man of few words… until he gets to know you!!! So we will have to meet up with Justin Bonello again for him to get into the swing of chatting. He can tell you that his favorite Justin Bonello recipe is koeksisters, but he may have changed his mind this week as we mastered his Messy Chocolate and Berry Pie!!!

Hood #6: We spent a lot of time chatting about all the twinkling stars you see at night when you are in the country.

Hood #7: We went to his “house” and ate quite a few muffins.

Hood #8: From the child that talks in paragraphs we got one word: Jeep. There was a fleet of them parked outside and they sparked a lot of comment from the shortest person with us!!! In fact we have all decided that that is what we would rather like to do… next time we visit a rural school and supply it with school materials and books we would like to travel “Jeep Style!!!”

And finally this is what Justin Bonello had to say…

And the Se7en + 1th: This was the thing I really wanted my kids to take home and remember for ever. Otherwise in the excitement of the day, we completely forgot to take photographs…

Well: packing for a trip… The best chest of drawers my kids have ever seen, can you imagine how much they could store in there!!! And a fleet of Jeeps – I didn’t even know my kids knew what a Jeep was!!! Marketing I tell you!!! And of course where to find him: We have been cooking up a storm and a review of the latest cook book, Justin Bonello Cooks for Friends, look out for the follow up post.